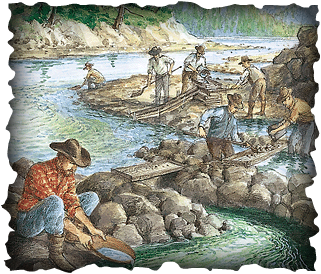 Main question:  What problems did miners or people face during the Gold Rush in 1849 to 1850?

Question #1: What problems did gold miners face when they were traveling to California?

Answer: At least 32,000 people came to California in 1849, then 1 year later in 1850 44,000 more people came to California. When miners were on their way to California  it could take up to 9 months or more to get there by foot or by covered wagon . Also most of the immigrants rushing to California had no choice but to come by sea and the promises of ship’s advertisements were quickly disproved by the realities of life on board and gold fever was soon replaced with sea sickness. There were many hardships, struggles and dangers at sea, terrible storms , inadequate food and water , rampant diseases , overcrowding boats , and shipwrecks.

Question #2: What problems did gold miners face when they arrived or were in California?

Answer: When gold miners arrived in California they found mining dangerous and difficult and there was absolutely NO guarantee of success! After spending all of their life savings to go to California , putting cherished belongings aside and leaving loved ones, friends or family behind, also their houses, many miners never found gold. A quote is “One of every five miners who came to California died within 6 months."

Question #3: What were some events and effects that happened during the Gold Rush?

Answer: Some world-wide events and conditions set the stage: Political instability and revolution , class  tension , economic depression and repression . These tensions caused crime/stealing , recklessness and racism in California as well . Gold and the Gold Rush also caused wars and other types of fighting.

Question #4: What were the populations of people in California before and during the Gold Rush?

Answer:  Some estimate that the population of people living in California increased from 1,000
to 86,000 people in just 2 years(a giant jump!). They also all had to share: food, water, land, and other resources (in California). By 1850, most of the surface gold had disappeared (other miners had already taken it, it didn’t actually disappear!) but new miners kept on coming to California not knowing at all where there was gold . The new miners had to work really hard to find the gold and dig really deep to find a piece of gold or nugget. Also there wasn’t a way to tell the miners that the gold was “disappearing”. There was no such thing of emailing or texting or phones in the 1800s!
If Cholera, exhaustion, starvation or onset of winter in Sierra didn’t claim them, Argonauts arrived in the foothills of California to discover that most of the “easy-placer” gold had already been picked up.

In conclusion, miners faced many issues, difficulties and problems. The Gold Rush was a very dangerous and difficult few years. There weren't many ways to fix these problems, fix these issues and cure the sicknesses & diseases that the miners caught, have or suddenly picked from other miners.


FUN FACT about how the Gold Rush started:  Did you know that John Marshall was the first to find a nugget of gold, then everyone wanted gold too so they ALL , well most of the world wanted find gold too or to get rich or at least wanted to help their families survive, get food and water, have shelter, get important resources,  and farm animals like cattle, horses, pigs, chickens or/and other important or farm animals that the miners needed to survive. 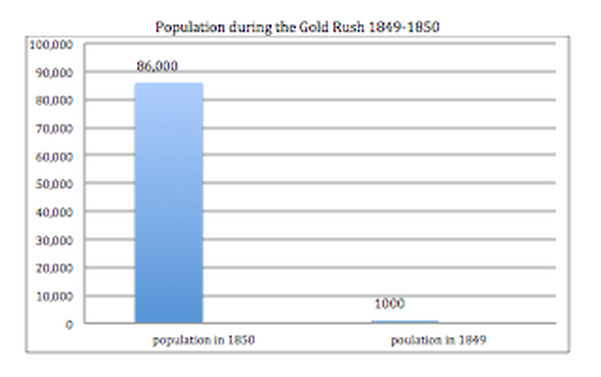